Jezebel (Heb. איזבל translit. "Izvel" ) was the queen of Israel as the wife of Ahab. The daughter of Ethbaal, priest-king of Tyre and Sidon, she was a devout Ba'al worshiper. She was responsible for the widespread introduction of Ba'al and Asherah worship in Israel and instigated persecution against the prophets of Yahweh. After nearly wiping out all of Yahweh's prophets and creating an order of Ba'al prophets, Elijah challenged them angering Jezebel. Jezebel attempted to have Elijah killed, but failed. She orchestrated the death of Naboth, in order that Ahab would have his vineyard (doing this without his knowledge). Finally, she was killed in Jezreel by order of King Jehu to avenge God his servants' deaths, with her body being desecrated beyond recongition.

Writing through the Apostle John, Jesus called a woman "Jezebel" in a letter to the Thyitaran church. 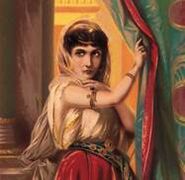 A depiction of Jezebel 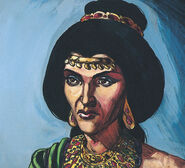 Jezebel as seen in a comic page on the internet

Another depiction of Queen Jezebel's death
Community content is available under CC-BY-SA unless otherwise noted.
Advertisement